Paige is a new graduate on her first solo trip without her family. Disaster strikes when she is left behind at a shady bus stop in Fang City, Missouri. After witnessing strange events, all she wants is to leave quickly but finds herself helping a desperate resident of the city who is willing to risk it all to get as far away from the corrupt cult the city has created. Both Paige and Blake face life-changing obstacles as they try to break free from an inescapable city of medically created vampires.

URL for purchase from amazon 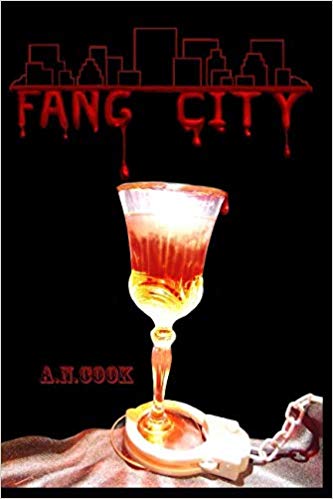 Note from the Author:

Fang City is not like other vampire books. I had this crazy idea in my head to create this city of vampires that were medically created by a doctor. When a person wants to join the city, the endure a four hour procedure where over 80% of his or her blood is replaced by a secret serum that enables the person to sustain life with vital signs that would need CPR for the average human. This extends life expectancy to about 160 years depending on the age at the time of the procedure. The body heals itself of illness and disease. Reproduction becomes impossible so young people have to adopt if they want to have a family. They can still eat food, and go out in the sun (wearing acceptable sunblock as they burn easily). What about blood? It gets them drunk! They don't kill their victims either. Instead, the victim develops a brief amnesia during the attack, his/her wound heals instantly and its back to normal like nothing ever happened.

Fun fact: this is the first book so far that I have had writers block with causing it to take 18 months to write. Most of my other books took an average of 12 weeks. Little Miss Not so Perfect was the only other book to take around a year or so to complete only due to the nature of the content.